On September 4, 2010 at approximately 4.35 a.m Christchurch had a magnitude M7.1 (Richter Scale) earthquake. The epicenter was located approximately 40km west of Christchurch CBD at a depth of about 10km. The most significant damage was to unreinforced masonry (URM) structures.

It is interesting to note that most people’s perception (anecdotal) is that Wellington is more seismically active than Christchurch and that it appears to have come as a fairly major shock (so to speak!!) that Christchurch had such a large earthquake ahead of Wellington (given that the latter city has been expecting ‘the big one’ for quite some time). From and engineering perspective however, as far as earthquake design magnitude goes, Christchurch is closer to the maximum seismic response zone than Wellington. This wasn’t always the case as earlier design loading standards had Wellington at 1.2 relative to Christchurch at 1.0 and now (per NZS/AS1170: 2002) Christchurch is at 0.5 compared with Wellington at 0.4.

On September 4 at approximately 7a.m I was driving to Airey’s Takapuna office to catch up on some work before going away on holiday. It was while driving to the office that I heard the radio broadcasts and the first thought was that this wasn’t for real (a bit like watching the September 11 live broadcast on TV!) (What is it with the month of September!)

As soon as I arrived in the office I went on line to see what info was already available as to the outcome of the earthquake.

It wasn’t long after arriving that I got the first call from our pallet racking client, Mike Southward of Southward Racking to give me a heads up on some of the events down south. Specifically, in relation to racking, there were major collapses of pallet racking installations in at least 3 warehouses in Christchurch. (Fonterra, Foodstuffs and Progressive)

As I was leaving on a plane to Rarotonga that afternoon I wasn’t able to follow up on the issues that arose due to the earthquake so I made a call to Justin Ralston from our Queenstown office. (Queenstown also felt the quake that morning). We needed someone on site in Christchurch to assess the damage to the pallet racking installations and the host buildings at the 3 different sites. Christchurch airport was closed due to the earthquake so Justin had to make the 6hr trip by car the next day (and back!!).

By Saturday afternoon on my way out of NZ all the news focused on the events in Christchurch.

A couple of weeks later I spent the weekend in Christchurch and had the opportunity of checking out the effects of the earthquake in the frontline central city area (on a borrowed mountainbike). Much of the CBD is one way streets and the CBD has been made considerably harder to negotiate due to the earthquake as many streets were blocked off in places by fencing to protect the public from damaged buildings. It was therefore quite an advantage being on my trusty borrowed MTB!

What has made matters worse is the number of aftershocks (more than 2000 to date) with the risk that already compromised buildings are in more risk of further damage due to weakening from previous shakes. During the weekend of my visit I experienced at least 8 after shocks (slept through some others) of which two measured 3.6 and 4.1 within a few minutes of each other.

A significant amount of specific seismic information can be found on the Christchurch earthquake at geonet.org.nz. This site gives details of all the aftershocks and a lot more information.

There are also a number of professional group websites that have a lot more information on the earthquake including engineering reports on various aspects of the quakes.

It is interesting to note that one report indicates some modern buildings would have been subjected to full or even greater than 100% design earthquake levels of loading and all appear to have performed well. This instills confidence in the current seismic design methodologies.

Complete collapse of various faces of URM buildings was also quite common.

At the time of my visit some buildings had been completely demolished and cleared from some CBD sites and others had been pulled down to reduce risk.

Most older buildings in the CBD had been “stickered” by the Christchurch City Council to categorise the buildings in terms of safety. Many carried red stickers indicating they were unsafe to enter and often portions of streets containing these buildings were closed off. This often also affected buildings that were ok ie: proprietors were unable to trade. 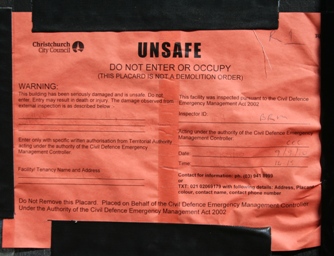 Further afield, I drove to Akaroa via Halswell Junction Road where Fonterra Brands have a warehouse that suffered a major pallet racking collapse. Aireys have just provided a design for a new racking system for Fonterra as part of an emergency consent process operated by the CCC to assist with quick recovery after the earthquake. From the outside the building appeared unscathed.

On a more technical structural note, most of Christchurch is located on deep deposits of alluvial soils categorized as Class D with respect to seismic response. Auckland for example is categorised in most cases as Class C and in comparison Christchurch structures would have a seismic design load approximately twice that of Auckland sites.

Christchurch is located very much in a transitional seismic zone where the seismic risk increases the closer one gets to the Southern Alps and main fault line. A comparable structure near the fault could have seismic design loads more than 3 times that of the Christchurch CBD and therefore more than 6 times that of Auckland.

My drive to Akaroa and then return trip via Lyttleton revealed a significant number of small to medium scale slips. Lots of debris on roads, possibly from aftershocks, and also signs of clean up of bigger slips. I also noted that a monument in Akaraoa had lost some significant sections of stonework.

Airey’s Pukekohe Director Mike Williams and myself revisited Christchurch recently for the Fire-NZ 2010 conference on fire engineering. As a consequence of the earthquake many of the papers presented related to the damage to fire safety systems and also to the NZFS emergency response and the issues they faced including damage to their own buildings... too much to go into detail in this report but very interesting. Of note was that a number of timber stave fire water tanks completely collapsed (leading to other problems).

Aireys have had a long track record in the design of storage tanks for fire water and other commodities including two large water storage tanks, one at Lyttleton port and the other at the city side of the Port Hills. Both appear to have performed well in the earthquake.

Aftershocks had been infrequent in the few days leading up to the conference but while there, there were two 4.5 magnitude quakes, one just after midnight and one at about 6.40a.m the same morning. Mike unfortunately slept through both (he had never experienced one before) and I felt the later one which gave my hotel room a good shake.