Whitianga Waterways on the Coromandel Peninsula is New Zealand’s largest canal housing project. It is an exciting twenty-stage development and is expected to be completed over a period of 20 years. The finished development will encompass approximately 1500 lots, including 700 canal frontage lots and 100 airfield lots. It is intended to integrate waterfront retail and apartments, tourist accommodation, retirement and medical facilities. It will also provide for a range of service industries including a commercial gateway zone.

The project to date has involved the dredging of a 1.5km access channel in the Whitianga Harbour, the development of 6 stages of canals and sections, the Airpark Subdivision, State Highway 25 Bypass, Joan Gaskell Drive main town feeder, commercial zone land on Joan Gaskell Drive and the construction of a Placemakers retail development.

Some exciting projects in current planning include a large format retail store in the commercial Gateway Zone on Joan Gaskell Drive and a sports ground complex to be developed for Thames Coromandel District Council, intended for local community use.

Whitianga Waterways is a joint venture project between Hopper Developments Ltd and the original landowners. Planning for the project began in the mid 1990’s with all necessary consents being granted at the end of 2000 and beginning of 2001 with an act of Parliament needed in the final stages allowing the project to go ahead.

Airey Consultants Limited is privileged to have been involved in this development as Project Engineers since inception in the mid 1990’s. 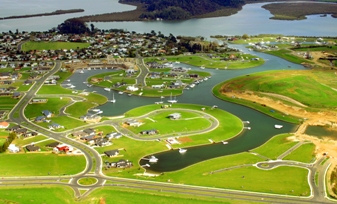